This project is a collaboration with the Octopus Foundation and Ionian Dolphin Project (Tethys Research Institute). In this collaboration, we contribute technical and logistical support, data management and scientific analysis.

The collection of baseline biological data is an essential prerequisite for the conservation of the monk seal. Small population size and inaccessibility of coastal cave habitat make this difficult. In 2018 we partnered with the Octopus Foundation (Switzerland) to pilot their innovative remote autonomous camera technology. Cameras installed inside caves transmit high-resolution photos, allowing individuals to be identified and tracked. External cameras allow us to correlate seal presence with human activity and meteorological conditions. 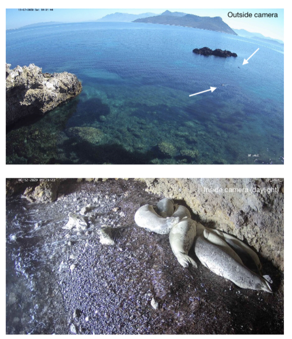 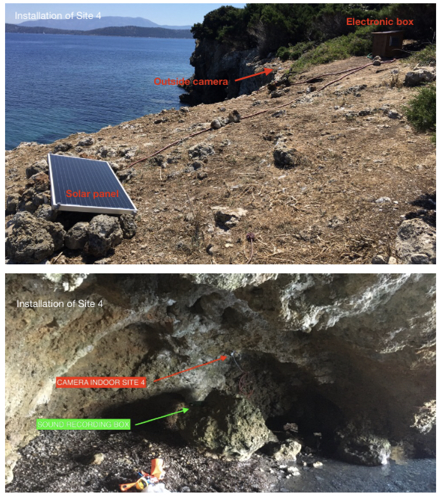 These data are transmitted and organised by staff at KOSAMARE and Octopus Foundation to create an open source archive. During phase one of the project from 2018-2020 we piloted the new technology. From the beginning of July 2020 to the end of November 2020, the four kits recorded 87,000 images that prove useful to biologists.

So far, we have identified a local sub-population of at least 10-15 individuals. The Octopus Foundation have been working on a new software programme that will allow individuals to be identified using artificial intelligence, as well as collecting data on human activity including boat presence.

The external cameras also allow us to record meteorologic conditions. These are important to note since they influence cave choice by seals. Bad weather can pose a threat, particularly to young seals. In the past, seals born on beaches would have had safer conditions, but the necessity to give birth in caves has created a new threat.

The table below gives a record of monk seal occupancy from July to November 2020, at the four camera sites. The table also highlights some technical hurdles that were overcome in the final stages of the pilot project by Octopus Foundation, and their testing of new audio and underwater technologies.

On 2nd November 2020, at 0400, the team observed the birth of a new seal pup. The improved software developed by Octopus Foundation allowed us to switch to video mode and record a series of short videos after the birth. The mother and her pup were recorded in the cave for almost 10 days before they disappeared from the camera view. They were both recorded again eight days later, on November 19th 2020.

The presence of multiple cameras over a wide geographical area has made It possible to record some seals’ travels from one cave to another. In 2020, we were able to observe three different seals in at least two different caves, 35 kilometres from each other. This information will be useful in the determination of range and travel of the local subpopulation. These observations demonstrate the potential that the technology has for gaining a better understanding of the monk seal through research partnerships.